END_OF_DOCUMENT_TOKEN_TO_BE_REPLACED

The important change about 1.3.0 is that there is new tool – omnipitr-backup-cleanup. What is it for?

END_OF_DOCUMENT_TOKEN_TO_BE_REPLACED 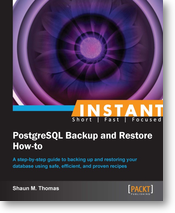 Around the time that Xzilla wrote about the book, Packt contacted me and asked for a review.

Since I generally don't really read technical books, I declined the offer, but Sandy from Packt was very persistent, and asked if I could inform about book giveaway contest.

The book is definitely PostgreSQL related, and Xzilla suggested to check it out, so here it goes:

END_OF_DOCUMENT_TOKEN_TO_BE_REPLACED

This version has one important new feature: when you're calling omnipitr-backup-slave, it will make backups only of required xlog files, and not, as previously, of all in walarchive directory.

This is important, especially in case you have multiple slaves, or you keep shared long-term walarchive. Previously – backups would get all files from walarchive (-s option to omnipitr-backup-slave), but now, it picks just the ones that are needed.

On somehow related note – I will be working now, finally, to get omnipitr-monitor functionality working.

This new version has one important new feature – which is so called “direct destination" for backups.

What it means? What it does? How it helps? Let's see…