Yesterday, on #postgresql on irc some guy asked:

Well, I was not really in a mood to solve it, so I just told him to try with recursive queries, and went on my way.

But I thought about it. And decided to see if I can write the query.

To get some test data, I created two simple tables:

Data in them is very simple:

In case you wonder – the data represents base map for “Ticket to Ride" game – awesome thing, and if you haven't played it – get it, and play. 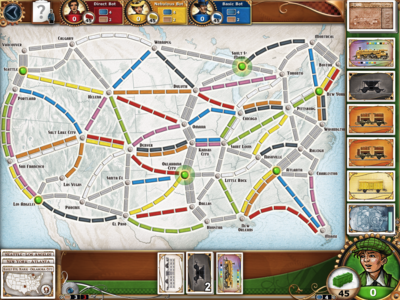 This map was part of review of the game on ars technica.

But anyway. So, I have 36 cities, and 78 unique paths between them, each with length information. So, with this I should be able to find the shortest path.

One word of warning though – the fact that it's possible to do in database, doesn't mean it's good idea. Personally, I think that it should be done in some standalone application, which would use some smarter algorithms, extensive cache, and so on. But – this is just a proof of concept, and the data size that I'm working on is small enough that it shouldn't matter.

Each route is stored only once in routes. So I'll start by duplicating the rows, so I will have them written “in both directions":

This will save me some typing later on.

First, let's start with some small route, but one that will show that it actually works – Duluth-Toronto is great example.

Reason is very simple, We have these 3 routes:

There is a direct connection (length 6), but it's actually cheaper to go via Sault St Marie, with total length of 5!

Here is a pause, of ~ 1 hour when I tried to write a query to solve my problem. And I failed. Kind of.

Query that would return the data is relatively simple:

But the problem is – it's extremely slow. And uses a lot of resources, which made OOM killer in my desktop to kill it (yes, stupid OOM killer).

I tried to implement simple pruning of searched paths if they are longer than current shortest on given route, but I couldn't find a way to do it – it seems to require subselect, and subselects referring to recursive queries, are not allowed within the recursive query itself.

(I think that perhaps RhodiumToad (on irc) can do it in a single query, but I'm far away from his level of skills, so I had to pass)

Does that mean it can't be done in database? No.

Luckily, we have functions. And functions can be rather smart.

To make the function simpler to use and write, I defined a type:

This is a quite easy way to encapsulate all information about a single route as somewhat scalar value.

Now, I can write the function:

Looks huge, but in fact it's only because there are many queries inside. So, let's see what the function does:

If that's complex, let me show you an example. What is stored, in which variable, at which step, when finding the route from Duluth to Toronto.

Based on the final_routes above, query in lines 61-72 calculates correct answer, and shows it.

And how about a cross country?

The longer the road the more time it takes to find it. Which is pretty understandable.

So, to wrap it. It can be done in database. It is not as slow as I expected. I wasn't able to find a way to do it without functions, but it might be possible for someone smarter than me.

And I still don't think it's a good idea to put this logic in database.

30 thoughts on “How to get shortest connection between two cities”