what's this, you ask? basically – a rather nice das (direct attached storage) from dell.

since this will be used as database storage, i wanted to make some performance tests.

the box was connected to a nice server, i had handy (also dell), specs:

for making tests we used bonnie++. test procedure was quite simple:

i knew we will be going for raid10, so this is what we tested at first.

2 separate series of tests were made:

(all tests were done using no read ahead, and write-back using controller's battery backed up memory). 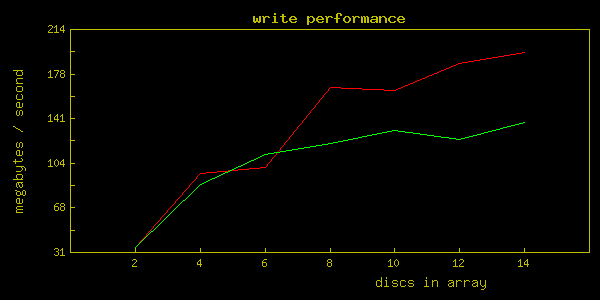 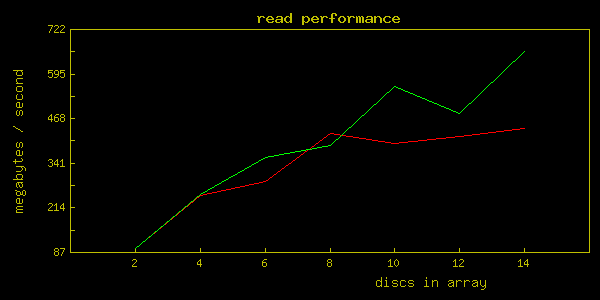 if you want the results as table:

as you can see we tested more than i showed in graphs above, but the rest of tests were only for “fun" of testing :).

strange thing – purely hardware raid has very visible “steps" in write/rewrite performance. speed was gained only when total number of used discs was power of 2. i don't know why, but this is how it worked. in mixed software/hardware raid – there was no such situation.

since we have 15 discs, we decided to use layout of:

theoretically this layout should give best results.

after creation of the arrays and mkfs i decided to make a concurrent test of all 3 arrays at the same time.

(i show here all 3 results for each array for comparison purposes).

as you can see the numbers are lower than expected. it has to be noted that 8xraid10 disc finished tests as first, 4xraid10 as second and 2xraid1 as last.

in general i think that the layout we've chosen is the best possible on this array, but i can't help wondering why is this controller so performance-bound to powers of 2.

hope you'll find the numbers useful for your own purposes.