I will of course follow no schedule or order – if I'd had to – it would be my job, and in this way – it's fun.

First configuration parameter to write about is checkpoint_completion_target.

First, let's think about what checkpoint is.

As you perhaps know PostgreSQL keeps cache of pages (8kB (by default) disk blocks) in RAM. To make it available to all backends, it's stored in shared_buffers, and it's (usually) taking most of the shared_buffers.

Whenever Pg needs to do anything with given page, it checks if it is in shared_buffers, and if not – it loads it (doing some logic to make sure it will not exceed size of shared_buffers by adding new page).

This also happens on writes.

Whenever you write anything (think: insert, update, delete) the change is not written to table. Instead it is written to these pages in memory.

Now of course is a question – what happens if there will be server crash? Since the data is in ram will I lose it? No. Because data is also written to “WAL". WAL are those 16MB files in pg_xlog directory. These are (virtually) never read, and just contain list of changes to pages.

So, the flow looks like this: you issue insert. PostgreSQL loads page to memory (if it wasn't there earlier), modifies it, and writes information about the modification to WAL. The change is not applied to real table files.

Now – after some time – there is a lot of modified pages in memory, that are not applied to table. And this is when CHECKPOINT happens. There is some logic when checkpoint is issued (I will write about it in some later blogpost), but for now, the important part is: when checkpoint happens, all modified (so called dirty) pages are written to actual table and index files.

So far so good? Hope so.

Now – size of checkpoint is of course variable, but depends on size of shared_buffers, and how often you have checkpoints, and how write-intensive your application is.

Let's imagine, that you have server with 100GB of shared_buffers (that's a lot, but not unheard-of). And it's write intensive. So, when checkpoint happens, it could need to “dump" 100GB of data to disk. More or less at once. That's a problem. Because this is huge spike in I/O, and will definitely influence concurrent performance of normal queries.

This is where checkpoint_completion_target shows.

Let's come back to our example. We have 100GB of data to be written to files. And my disk can sustain 1GB per second of writes (that's big server with great I/O). When doing normal checkpoint (the way it was before 8.3), it would cause 100 seconds to 100% utilization of bandwidth to write the data.

But – with checkpoint_completion_target set to 0.5 – PostgreSQL will try to write the data in 2.5 minutes – thus effectively using only ~ 700MB/s of bandwidth, and leaving 30% of I/O capacity for other tasks. That's huge benefit.

The problem with this approach is relatively simple – since checkpoint take longer to write, old, obsolete wal segments stay longer in pg_xlog directory, which will grow larger.

At the time of 8.2, number of files in pg_xlog directory was usually going up to 2 * checkpoint_segments + 1.

If you read above paragraphs with attention to detail you saw that I used word “try". Reason is very simple – effective I/O bandwidth is variable, so there are no guarantees. So, let's see how it really works.

For tests, I use my test machine, with setup that puts data, xlogs and query logs (useful to test for locks/slowdowns) on separate partitions.

While putting these on separate partitions of the same disk will not increase performance, it will let me accurately monitor what happens on each of the partitions while testing.

With these 3 partitions, I arranged them so:

To test Pg, I'm using standard pgbench program, with scale 35 (-s 35, which means that the generated database, without any tests done, is ~ 550MB).

I could have used larger database, but since pgbench writes all-over the database, I want to make sure the writes to tables happen only due to checkpoints, and not because some shared_buffer has to be freed to make place for another.

Since my HDD sustains ~ 50MB/s of writes, I can assume that the checkpoint with checkpoint_completion_target = 0 should take ~ 11 seconds.

This is IO utilization of PGDATA partition with checkpoint_completion_target = 0:

What is %util? From man iostat:

Percentage of CPU time during which I/O requests were issued to the device (bandwidth utilization for the device). Device saturation occurs when this value is close to 100%.

And, based on the graph above, I immediately saw that my test dataset is too large, as the checkpoint took most of the time.

This is IO utilization of PGDATA partition: 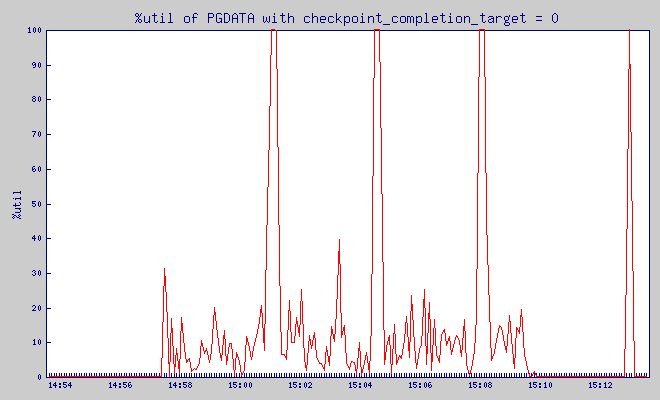 What is %util? From man iostat:

Percentage of CPU time during which I/O requests were issued to the device (bandwidth utilization for the device). Device saturation occurs when this value is close to 100%. 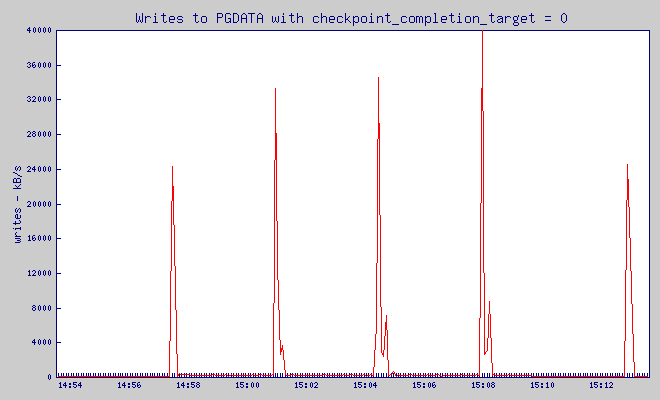 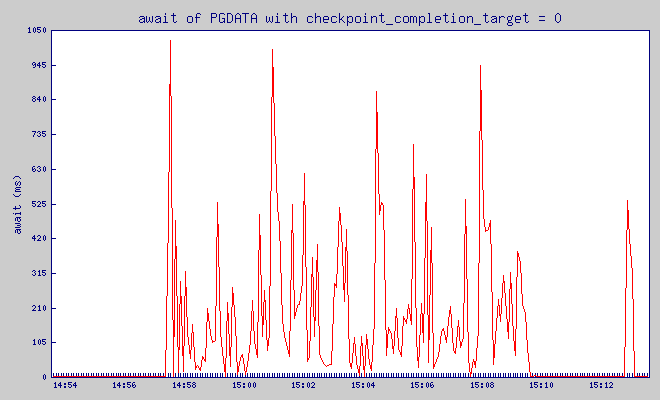 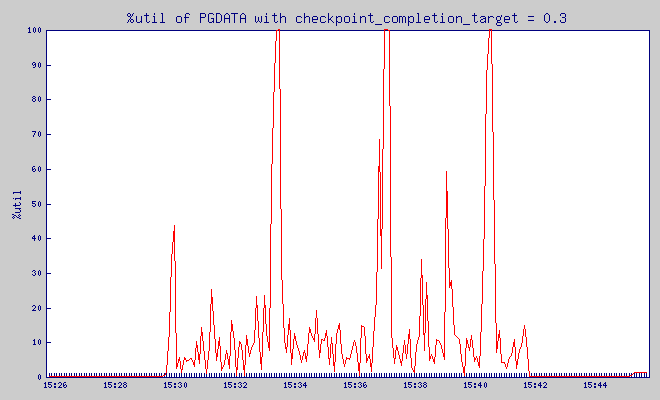 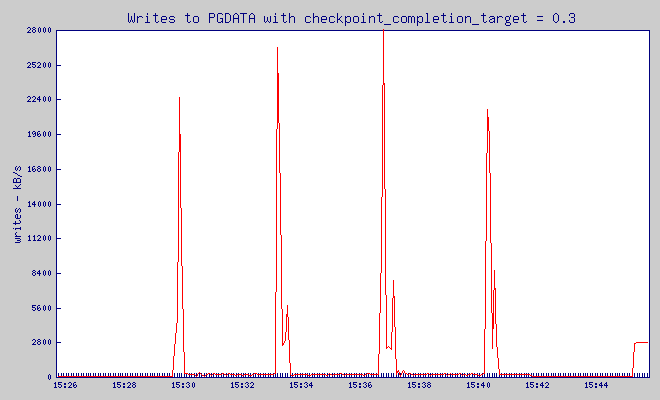 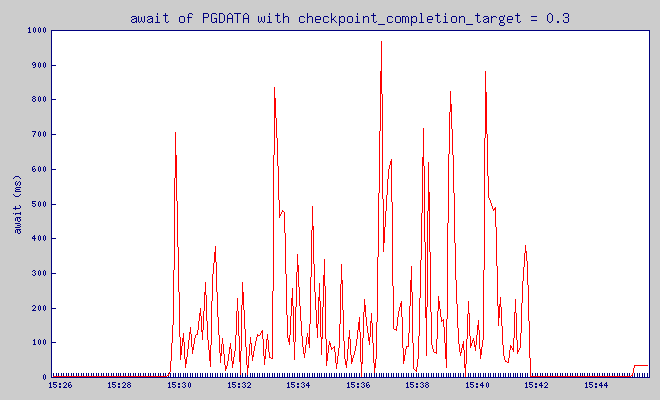 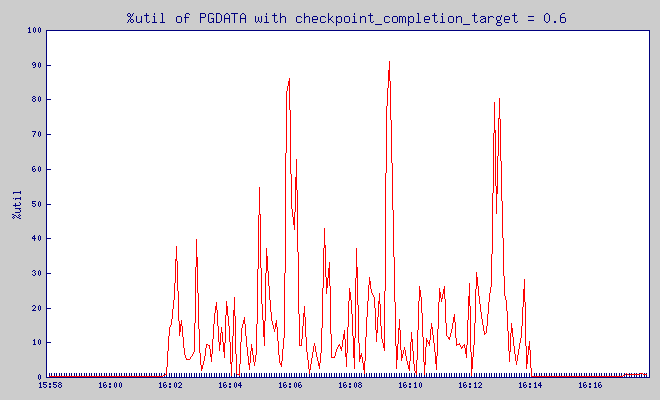 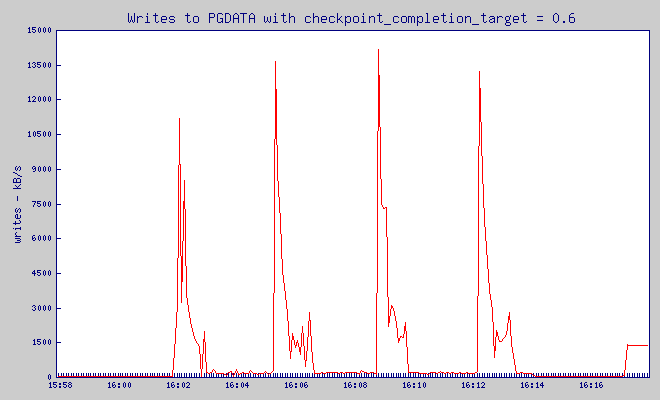 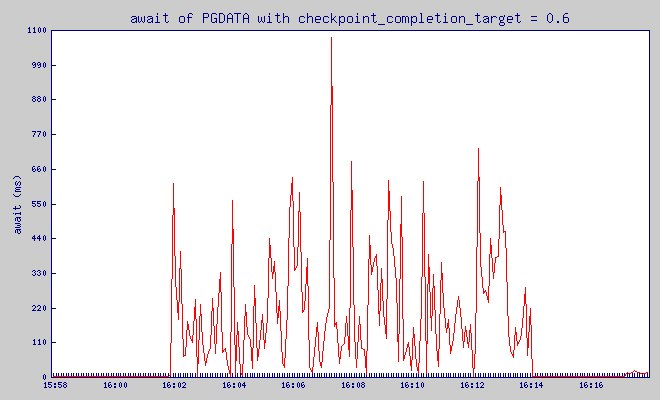 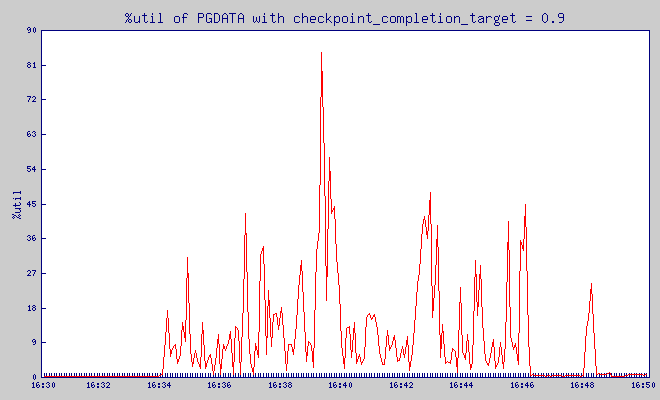 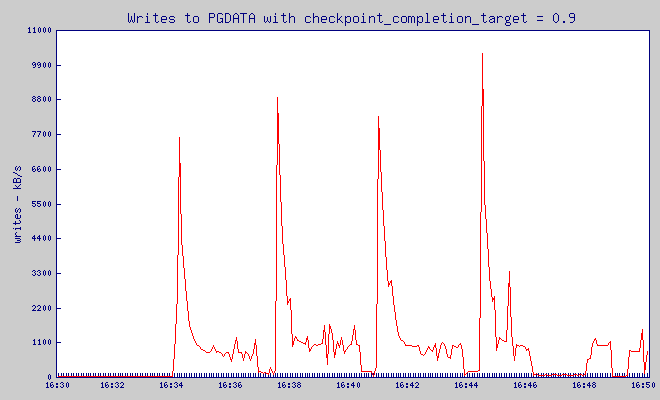 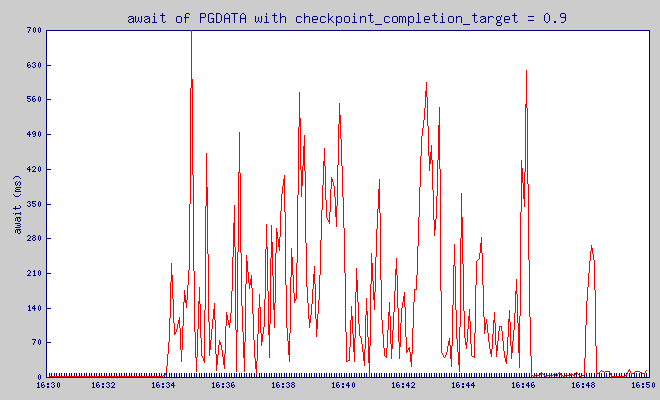 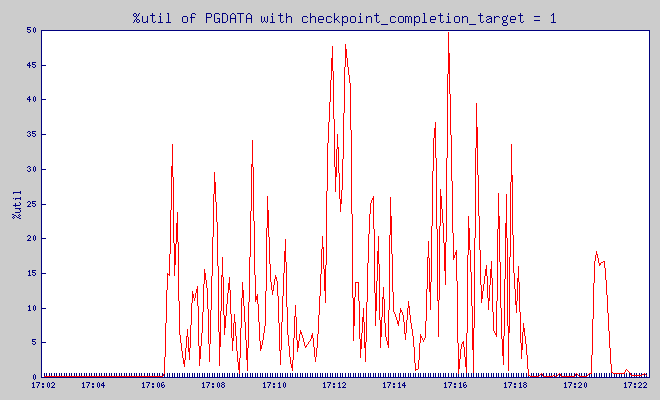 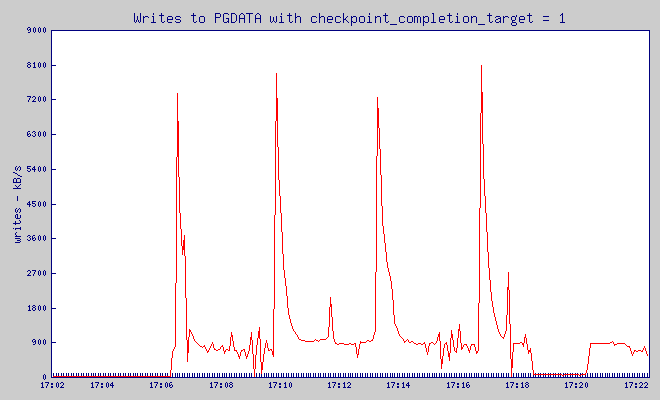 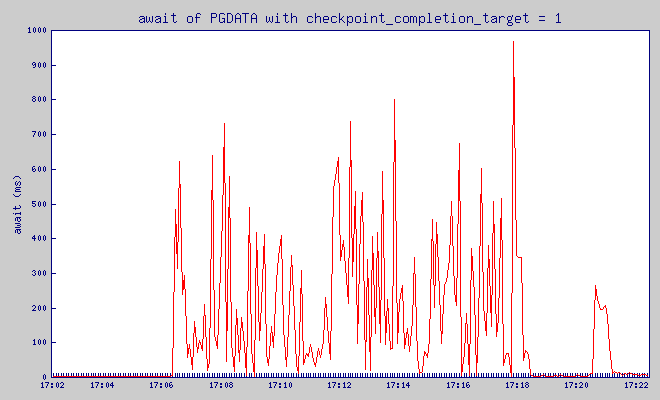 And how is it relating to number of slow queries? As you perhaps remember – I log every query that took over 5ms. Based on the query log, I can see how often we had slow queries.

So, is there any drawback to increasing it?

Well, for starters – it can bloat your pg_xlog directory, according to the formula that I brought at the beginning of the post.

And second – it will not always work – if your shared_buffers are too large, and you write to them too much – pg will have to checkpoint virtually all the time – just like what happened in the first graph that I showed, thus any “slowdown" will simply not work.

Aside from this facts – I can't really think of any reason not to make it to 0.9 (I wouldn't go with 1.0, to avoid situation when next checkpoint is postponed, due to previous one not being done yet) as a basic change in tuning PostgreSQL.